Mount Holly, NJ, 23 March 2007 – They are only two wood-frame geodesic domes, assembled as a small part of a school consolidation project now under construction in Eastampton. But the striking visual images of their construction recently made the top front page of the Burlington County Times and a spot on Channel 6 Action News. So, what’s all the fuss?

The two 16-foot diameter domes were specified by Scott England of the firm REGAN YOUNG ENGLAND BUTERA, Referendums, Engineering, Architecture, Design (aka “RYEBREAD”). As partner-in-charge of the Eastampton Community School project, he is responsible for the $18 million of additions and renovations at the site. England designed the domes to cap the children’s reading area in the new library, and above the outdoor classroom outside the new multipurpose room. “The domes represent the beauty of math & geometry, while creating the maximum impact with the minimum of resources,” says England. “Not a bad lesson for a school.”

The two domes are made of cedar struts, with aluminum connectors. They were fabricated and assembled by Blair Wolfram and John Kennedy of Dome Incorporated, based in Minneapolis. The occasion for the news coverage was not only the appearance of the domes at the construction site, but also a presentation about domes that Wolfram made to 85 eighth-graders at the school. He shared the podium with Joseph Clinton, a design scientist that had worked with NASA and R. Buckminster Fuller, inventor of the geodesic dome. 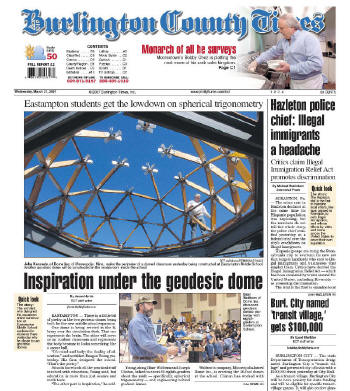