Tavern-owners Bill & Audrey Dempster decided to live out RYEBREAD’s maxim of “Reinvest in your Community!”. They entered into a lease/purchase agreement with the Mount Holly Urban Enterprise Zone, and rehabbed an underperforming retail space astride the town’s Pine Street gateway.

Doubling the square footage of their previous location, they moved their sports bar from across the street, while enhancing it with a full kitchen and restaurant. They also installed an outdoor serving area out front, to advertise the business to passers-by.

For the exterior, RYEBREAD remained faithful to the building’s Mid-20th Century look, adding free-standing internally illuminated letters along the front edge of the canopy. Along the blank side wall, they created tall, natural aluminum windows.

RYEBREAD’s interior design can be described as “industrial chic”. The original dropped ceiling was removed, exposing the existing wood decking, steel beams, and pipe columns. The bar & fittings were cloaked in galvanized steel, and the exposed ductwork and pendant lighting match the contemporary, casual aesthetic.

With its striking design and prominent location, Dempster’s has become a local favorite among a diverse range of patrons. It also hosts a variety of seasonal celebrations and fundraisers. This well-designed and well-managed restaurant/bar has become a successful Mount Holly business, and an asset for the Township. 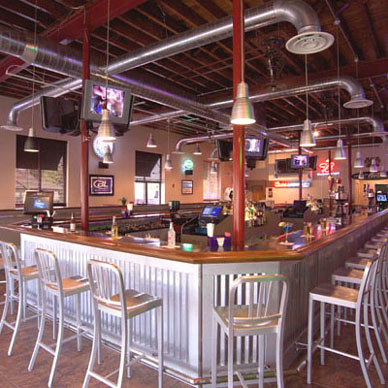