How to Design an Addition

Designing an addition always presents a challenge. How much do you mimic the existing building? After construction, should it look like it was there all along? Or should a new addition reflect its own time, and function?

These issues are aptly demonstrated by two recently completed museum additions I visited this August in Boston: the Museum of Fine Arts (MFA), and the Isabella Stewart Gardner Museum. Being built around the same time for art institutions only a couple blocks apart, you would think they’d take a similar design approach. Not true.

At the Museum of Fine Arts, architect Norman Foster chose to integrate his Art of the Americas wing into the overall mass of the building. The functions, forms, and materials reflect the earlier architecture (although articulated in a crisply modern style). The expansion follows the general character of the building, extending the logic of the museum’s Beaux-Arts plan. On the exterior, Deer Isle granite from Maine was used to match the stone of the original MFA.

Just a couple of blocks away at the Isabella Stewart Gardner Museum, architect Renzo Piano took the opposite approach. The addition is almost a separate building, with the narrowest of connections: a glass hallway. Almost all of the “museum” functions (ticketing, store, caf&eacute;, auditorium, education spaces, restrooms, offices, conservation lab) have been pulled out of Gardner’s original Venetian palace, and put into the addition. The new building is a distinct expression, clad in copper, glass, and aluminum. So, Piano’s solution means the addition has functions, forms, and materials quite different from the original building, preserving the original building’s unique character.

So, which is the right approach? In this case, both. The MFA addition is part of an on-going building program: it is neither the first addition to the museum, nor likely the last. On the other hand, the Gardner addition is obviously a one-time intervention, giving new life to Isabella’s singular vision. Even in what would at first appear to be similar challenges, each architect was able to respond to the distinct history and character of each project, creating an addition that works for both Owners and their Visitors. 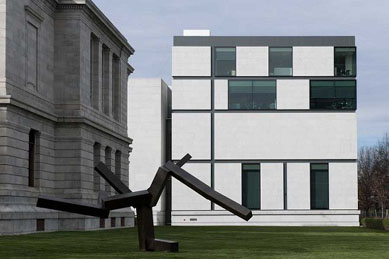